CalCOFI uses an assortment of ships to complete our quarterly research cruises. Here you will find information on the research vessels currently and previously used for conducting CalCOFI surveys. 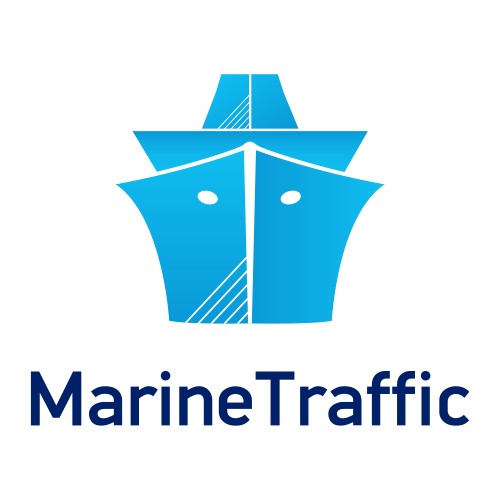 Want to know where these ships are right now? Use MarineTraffic to track their current locations.

NOAA Ship Reuben Lasker is the fifth in a series of Oscar Dyson-class fisheries survey vessels and one of the most technologically advanced fisheries vessels in the world. The ship’s primary objective is to support fish, marine mammal, seabird and turtle surveys off the U.S. West Coast and in the eastern tropical Pacific Ocean.

The ship is named after Dr. Reuben Lasker (1929-1988), who served as the director of SWFSC’s Coastal Fisheries Division and as adjunct professor at Scripps Institution of Oceanography, UC San Diego. Dr. Lasker built a renowned research group that focused on the recruitment of young fish to the adult population — a topic with implications for fisheries management throughout the world.

R/V Sally Ride is the newest ocean class research vessel operated by Scripps Institution of Oceanography, UC San Diego. The Sally Ride is named in honor of the former UCSD faculty member who was the first female American astronaut and the youngest American to fly in space. CalCOFI had the honor of being the maiden research mission completed by Sally Ride (November 2016 – 1611SR).

Sally Ride is an Auxiliary General Oceanographic Research (AGOR) vessel designed to perform multidisciplinary oceanographic research worldwide, from littoral environments to the deepest ocean, from the tropics into first-year sea ice. The ship is owned by the U.S. Navy and is a shared-use research facility within the University-National Oceanographic Laboratory System (UNOLS).

Bell M. Shimada was named by a team of students from Marina High School in Monterey, CA, who won a regional NOAA contest to name the vessel. The ship’s namesake served with the Bureau of Fisheries and Inter-American Tropical Tuna Commission, and was known for his contributions to the study of tropical Pacific tuna stocks, which were important to the development of West Coast commercial fisheries following World War II. Bell M. Shimada’s son, Allen, is a fisheries scientist with NOAA Fisheries.

R/V Oceanus is owned by the National Science Foundation and operated by Oregon State University. Oceanus is a mid-sized research vessel designed for expeditions lasting two to four weeks. The ship’s name is drawn from Greek mythology. The Titan Oceanus, father of the river gods and sea nymphs, was represented as a great stream of water encircling the Earth. Oceanus was believed to be the source of all bodies of water.

The ship was transferred to OSU from Woods Hole Oceanographic Institution in March 2012 to replace its sister ship, R/V Wecoma. Oceanus spent most of its time working in the North Atlantic, with occasional trips to the Mediterranean, South Atlantic, and Caribbean. With her move to Oregon State University, Oceanus continues her scientific mission throughout the Pacific, with trips ranging from the Bering Sea in the north, to the equator in the south, and as far west as Hawaii. 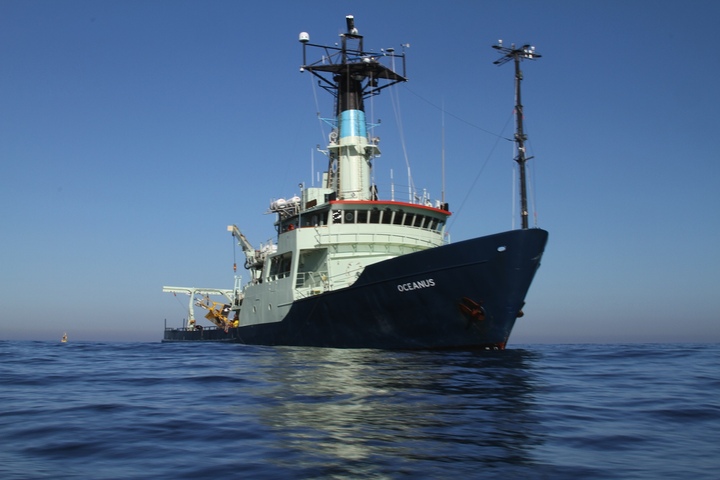 The Bold Horizon was originally “New Horizon” and owned by UCSD. It was used for oceanographic cruises by Scripps Institution of Oceanography until it was decommissioned in 2015, after CalCOFI 1504NH.

CalCOFI chartered Bold Horizon for 1907BH (July 2019) due to other research vessels being unavailable, and because of CalCOFI’s familiarity conducting research cruises from this ship. 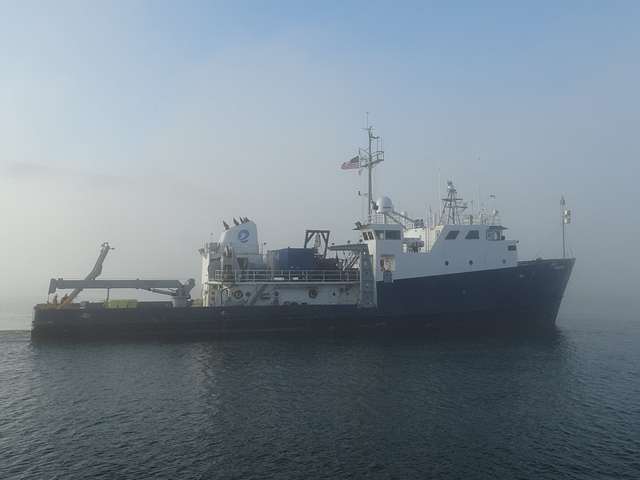 The Ocean Starr provides a broad range of scientific research capabilities with temperature-controlled aquaria and live specimen wells, walk-in freezer, dark room, data processing laboratory, and an underwater observation chamber in the bow and port side for studying fish behavior at sea. The ship’s twin 500-horsepower diesel engines give the ship a 10-knot cruising speed. 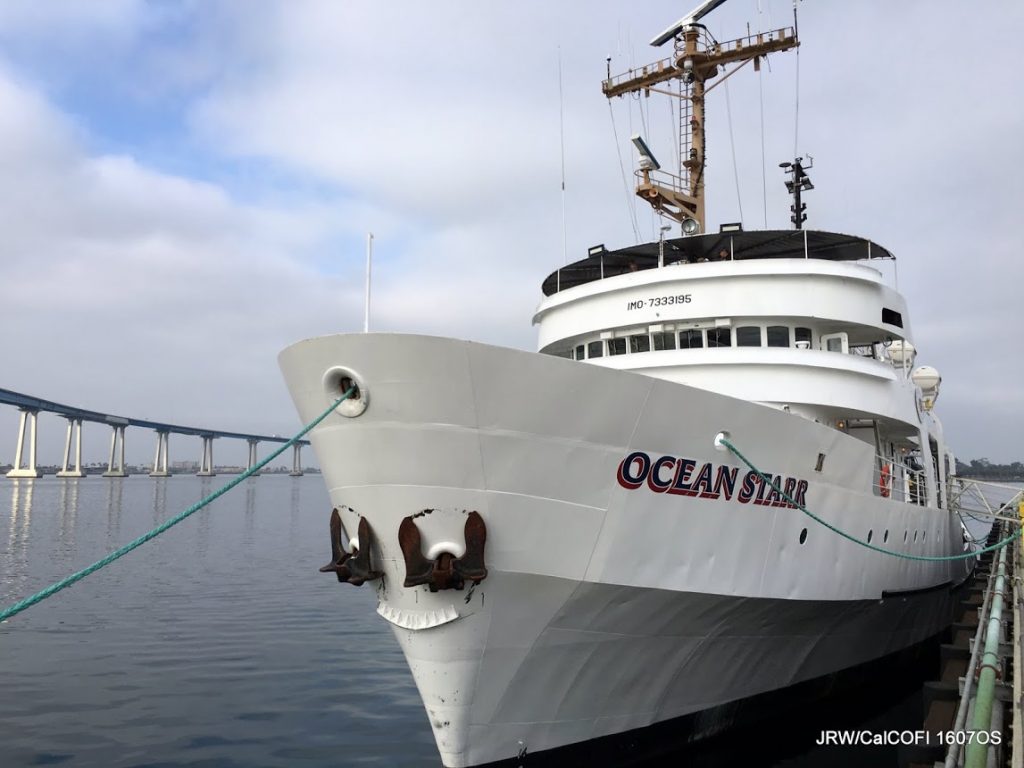 Check out the complete Scripps and NOAA fleets:

RV New Horizon served the US scientific community from 1978 through 2015. The 170-foot oceanographic research vessel, originally owned by UCSD, was a working platform for oceanographic cruises by Scripps Institution of Oceanography. It was decommissioned in mid-2015 after CalCOFI 1504NH. Renamed RV Bold Horizon, it is owned and operated by the Endurance Exploration Group/Eclipse Group Inc. and is docked at 10th Ave Marine Terminal, San Diego.

Decommissioned in June 2014, NOAA RV McArthur II was acquired from the U.S. Navy in 2002 and was converted by NOAA from a T-AGOS surveillance vessel to a multiple-disciplinary platform capable of a broad range of missions. As was it’s predecessor, the McArthur, the McArthur II is named after William Pope McArthur. The vessel was operated by NOAA’s Office of Marine and Aviation Operations (NMAO), and was home ported at NOAA’s Marine Operations Center, Pacific (MOP), in Seattle, Washington.

The ship conducted oceanographic research and assessments, throughout the eastern Pacific, including the U.S. West Coast, Central and South America. The McArthur II was involved in studies in several of the National Marine Sanctuaries on the west coast of the United States. The 224-foot ship engaged in measurements of chemical, meteorological, and biological sampling for several large scale programs within NOAA.

RV Roger Revelle is a 274-foot AGOR 24-class research ship operated by the Scripps Institution of Oceanography, University of California, San Diego. RV Revelle is the second of three oceanographic ships built by the U.S. Navy for oceanographic institution operations. It has a cruising speed of 12 knots and carries 22 crewmembers and 37 scientists. The 1996 October CalCOFI cruise, 9610RR, was the first research cruise on RV Revelle.

The ship is named for Prof. Roger R. D. Revelle (1909-1991), a distinguished university researcher and professor, the officer in charge of the oceanographic section of the Bureau of Ships (now Naval Sea Systems Command), a creator of the Office of Naval Research and head of its Geophysics Section, and a director of the Scripps Institution of Oceanography. Prof. Revelle was one of the first scientists to identify the issues of carbon dioxide emissions, the “Greenhouse Effect” and global warming.

RV Robert Gordon Sproul, named for the 11th president of the University of California (1930-1958), is the smallest oceanographic research vessel in the Scripps Institution of Oceanography fleet. Built in 1981, the 125-foot vessel operates with 5 crew and accommodates 12 scientists.

Robert Gordon Sproul’s outstanding contribution during his 28-year administration was the multiple-campus expansion of the University to meet the demands for higher education in widely separated parts of the state, while maintaining one institution governed by one Board of Regents and one President.

NOAA decommissioned the NOAA Ship David Starr Jordan in 2010, after the ship conducted oceanographic, marine mammal and fisheries research in the Pacific for more than 40 years. The 171-foot oceanographic research vessel was capable of operating a variety of biological and oceanographic sampling gear but its primary mission was to provide a working platform for the study of the ocean’s living resources.

“NOAA Ship David Starr Jordan played an integral and invaluable role in expanding our understanding of the ocean and marine life in the western Pacific,” said Rear Adm. Jonathan W. Bailey, director of NOAA’s Office of Marine and Aviation Operations and the NOAA Corps. “This remarkable vessel and all who sailed aboard her have more than earned their place in the history of fisheries and oceanographic research in the eastern Pacific.” (Courtesy of Marine Technology Reporter)

Homeported in Kodiak, Alaska, NOAA Ship Oscar Dyson is the first in a class of ultra-quiet fisheries survey vessels built to collect data on fish populations, conduct marine mammal and seabird surveys, and study marine ecosystems. The ship was commissioned in 2005 and operates primarily in the Bering Sea and Gulf of Alaska.